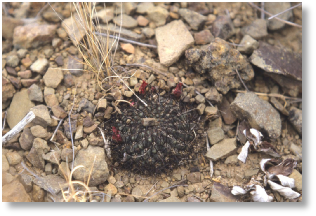 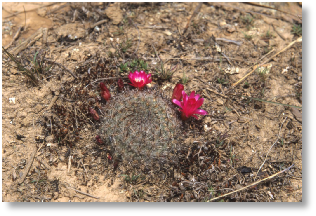 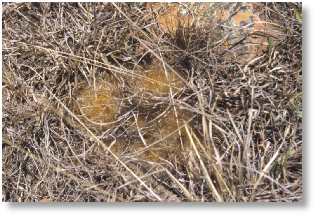 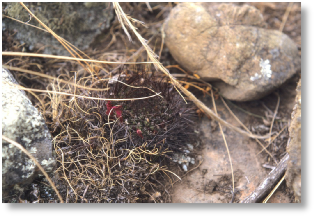 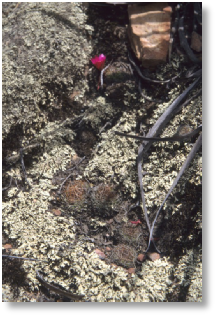 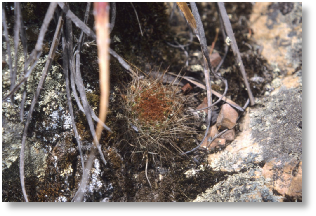 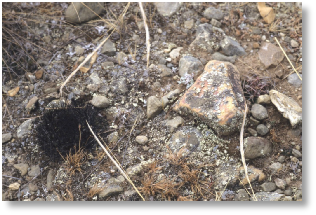 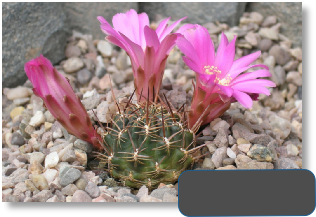 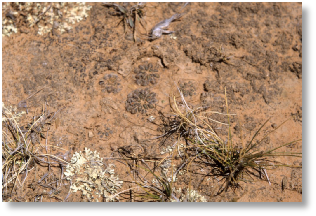 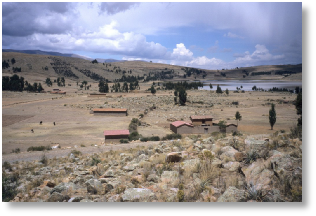 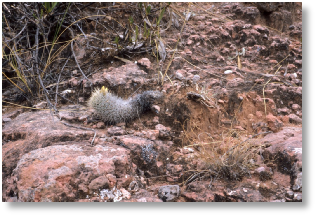 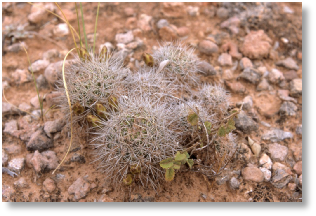 I was met by my guide for the trip Brian Bates at the airport in Santa Cruz on the morning of October 9th, 2001. During the 13 days of travel, we covered nearly 3000 km almost entirely on single track dirt roads. We crossed passes at 4200m, forded rivers and dipped down into the jungle. Four punctures aside, there were few real problems. On at least two days we drove for 8 hours without seeing another vehicle. From Santa Cruz, we drove west via Comarapa to Cochabamba. Then we went north to Independencia before heading south to Clisa, Mizque, Aiquile and eventually Sucre. After 2-3 days around Sucre, we headed east to Zudanez, and then via Pucara and Valle Grande back to Santa Cruz. We saw many different genera of cacti during the trip, but here I concentrate on the Sulcorebutias and Weingartias. It is worth mentioning that we rarely had to walk more than 100 m from the car to see the plants depicted here, but then I had an excellent guide.

Like the native Bolivians, our day usually started before 6 am to maximize the amount of daylight available. 4 Km outside Totora at 2775 m (BB249), we found a small form of S. oenantha (only 1 cm across) growing on a flat rocky area with low-growing xerophytes. Plants were hard to find when out of flower as now. 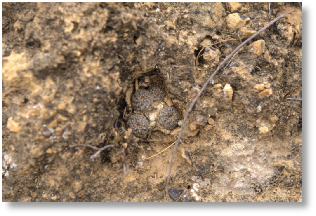 Near Chulchungani at 3050m (BB370) on a hillside on the right of the road was the type locality of S. tiraquensis fma. bicolorispina. The shallow-rooted plants were growing among sandstone rocks and many were flowering – some bright red and others with a purplish (magenta) tinge. Plants were growing next to cultivated land where potatoes were growing, and many of the cacti had been dug up and left to die, presumably by the local formers. Yet they were growing among rocks where no cultivation could ever be possible. 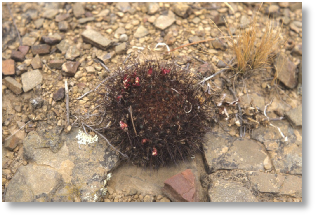 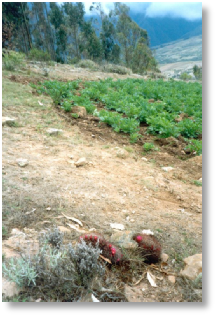 A km or two further along the road (BB1058), we spotted a spectacular Trichocereus conaconensis in flower on the side of a steep gorge. Also growing here on the flat ground on top of the cliff were large plants of Echinopsis calorubra On the opposite side of the gorge, we found S. tiraquensis fa. bicolorispina, some with all yellow spine, in a grassy area. Brian chatted to a campesino and his wife with their little boy (one of five children) and a flock of 50 sheep. They told us that the sheep did not touch the cacti but goats had acquired a taste for them. 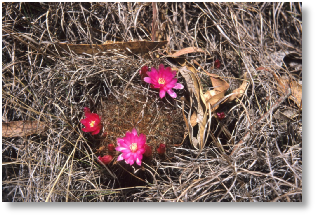 A little West of Lopez Mendoza at 3250 m (BB1059), large plants of S. tiraquensis (a fairly typical form) were growing on a gentle rocky slope. Many of my slides from this and the next two days were lost, as Fujifilm lost one film. Fortunately, I was using two cameras. 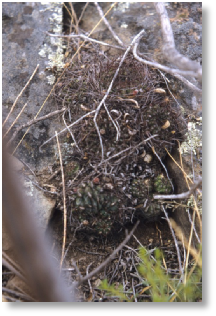 The type locality of S. tiraquensis fa. longiseta near Rancho Zapata (23 Km west of Monte Punco at 3180 m, BB369) is an inselberg not far from the road, but to reach it we had to cross a small river on foot. The plants were growing in small pockets of soil or moss on the rock face, and many were in flower. One or two were untypical in that they were growing in heavy shade and had poor spination. 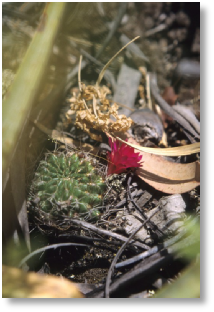 S. steinbachii v. polymorpha was growing in a stretch of flat rocky land about 50 m wide between the road and the river gorge (1 Km east of Kairani at 2525 m, BB368). On the other side of the road, the land was mainly cultivated. A small plant of Echinopsis calorubra can be seen on the right of one of the pictures. 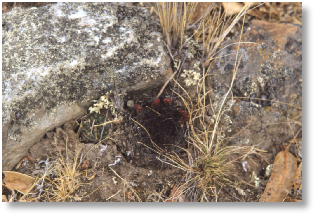 A few km further on (at 3650 m altitude, BB1060) near Toralapa, Brian could ‘smell Sulcos’. He went right, and I followed a low grassy ridge to the left adjacent to a eucalyptus plantation. For once, my sense of smell was the keener I found hundreds of small plants (few more than 1 cm in diameter) shrunk deep into the ground. We now believe that they are a form of S. steinbachii. It was bitterly cold here with a biting wind. 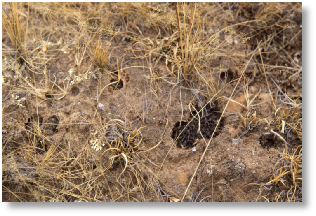 Three days later we were on the road from Cochabamba to Mizque and found S. taratensis on a rocky hill at 3365 m (BB1067), below a eucalyptus plantation. The plants have large tap roots and grew in pockets of deep soil among the rocks. Although some of the plants look very different, they are probably the same species.

At 3460 m (BB1068), we found another population of S. steinbachii. In the afternoon at this altitude, the weather was cold and overcast. A disjunct population of Puya raimondia was growing a little further on; this is mainly a Peruvian species. 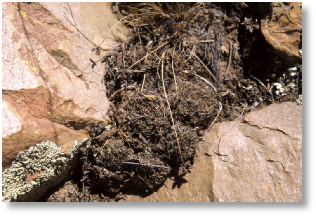 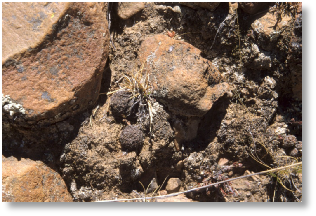 At 3180 m (BB1069) among the rocks by the side of the road, S. steinbachii v. australis. The plants were usually solitary and up to 6 cm in diameter, but with occasional clumps. We found this species everywhere we stopped along a 20-30 km stretch of road, although we dropped 1000 m in altitude. 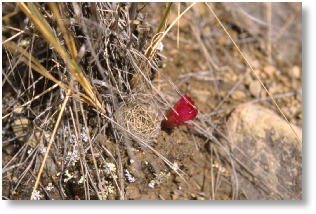 At 2190 m near Mizque (BB1072), S. steinbachii v. australis again. We had to climb a bank, go through a thick conifer hedge, walk round a ploughed field and then climb to a rocky outcrop to find the plants. Here, each plant looked different – pectinate spines to long yellow centrals. 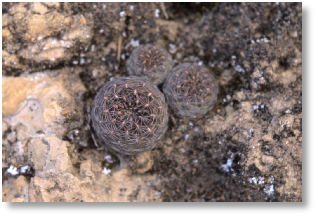 You need a sturdy car to travel in Bolivia. Next day, we forded this river three times on a side road before we eventually gave up. This slide could also be entitled a ‘Bolivian carwash’ 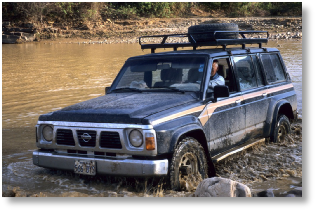 It then took us a few hours to drive to see S. purpurea at its type locality, 10 km from Chaguarani at 2960 m (BB357). The plants were growing on a very exposed hillside among rocks and rough grass, right at the top of the pass. They must be tough. 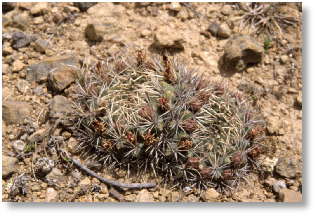 Near Chaguarani - S. cylindrical v crucensis with pink flowers, at 2638 m (BB358), among rocks by sandstone cliffs. A white-flowered form of is supposed to grow here (HS44/44A) also, but we could see no sign of it. 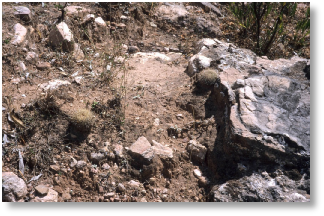 Then the yellow flowered form S. cylindrica at the type locality, 5 km from Chaguarani at 2500 m (BB360). To reach the spot, we had to walk 200 m through a eucalyptus plantation to a rocky sandstone area on a gentle slope. On this day, we drove for 8 hours without seeing another vehicle. 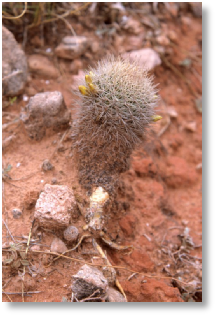