We encountered many more beautiful cacti – Rebutias, Lobivias, Parodias, Oreocerei, Cleistocacti – many in full flower, but we did not encounter Sulcorebutias again until near the end of our journey. After leaving Sucre for the last time, towards Ravelo in heavy cloud, which closed in on us as we climbed the mountain pass. When we crossed over into the next valley, the clouds lifted slowly giving us bright sunshine until the late afternoon. Our first stop at the top of the next pass was in a rocky area among red sandstone rocks (BB 1203, 3300 m), where we again found what appeared to be S. losenickyana, but not in flower.

At the next stop (BB 1204, 3650 m), we again found a Sulcorebutia sp., probably S. losenickyana again. Most plants had dark red flowers, but at least one had a magenta flower. Most plants were only 1 cm in diameter, though we did find two growing in moss in a shear rock face that were somewhat wider (about 3 cm).

Continuing towards Culpina, we drove up a side road  to a rocky area, which was the type locality for Rebutia leucanthema, (BB 533, 3500m). Again, we found large clumps of Weingartia cintiensis (up to 30 cm across) with long sturdy spines. Only this species was showing its typical small yellow flowers occasionally.

Just after Padcoyo (BB 563, 3250m), we left the car to walk to the saddle between two hills where Brian knew that Cintia knizei grew. On the way, we passed lots of small W. lecoriensis and C. rossiana. The Cintias were hard to find in the stony ground, as most were only 0.5 cm across with the largest being 1 cm. At best, only a few spineless tubercles poked up from the compacted gravel surface, and it was necessary to get down on hands and knees to find them. It is obviously difficult for the plants to produce their distinctive tap roots in this substrate, and they are apparently often distorted by the pressure. It was still very dark and overcast.

in the gathering gloom in the late afternoon, we reached the Quebrada Honda (BB 339, 3110m) where we again found W. lecoriensis

We spent the night in Camargo, then next day,as we climbed out of San Pedro, zig-zagging up the hill (BB 062, 2550m) for mile after mile, we encountered countless Lobivia lateritia, some up to 30 cm high, and nearly always as single stems, Parodia roseoalba and large clumps of Weingartia cintiensis (up to 30 cm across) with long sturdy spines. Only this species was showing its typical small yellow flowers occasionally.

Climbing out of the plain past Alto Lecori, we reached a level stony area where many globular plants were evident (BB1198, 3465m). This had recently had heavy rain, but now only a little was still falling. The most abundant plant here was Weingartia lecoriensis – many of which were in flower – growing in what appeared to be gravel. Most of the plants were solitary, but a few had two or three heads. Individual heads were up to about 12 cm in diameter.

Just north of Vilamani (BB1197 at 3550 m), we stopped for a short break and on walking up a dry gully carved out by rain run-off, we found many different species of cacti, including Weingartia lecoriensis, all growing in comparatively deep soil. Presumably the gully provided some shelter and more water than the open hillside. We felt some drops of rain and the sun was blocked by clouds.

Just outside the town (BB 1184, 3770m), we stopped to see the cacti in an area of grey-black stony soil, resembling from a distance the slag heaps around coal mines in Scotland. The sky was overcast, rendering the scene gloomier than it might have been. However, the cacti were marvelous and we counted 10 species within an area of 50m square, including Weingartia westii. 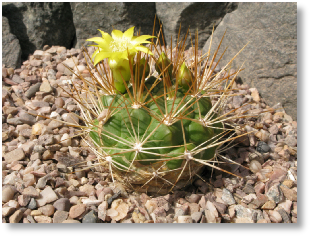 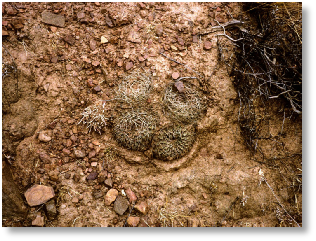 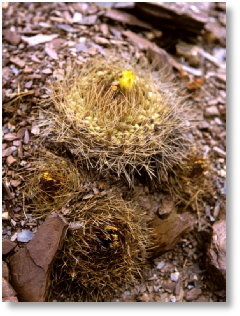 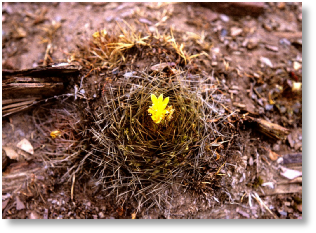 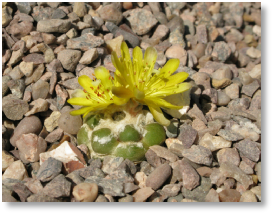 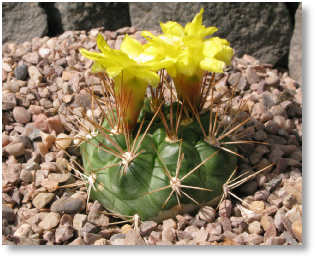 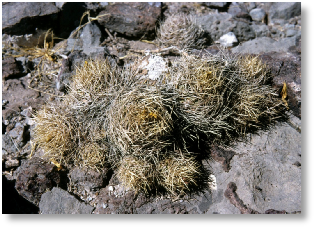 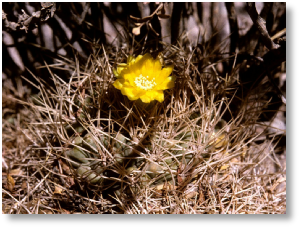 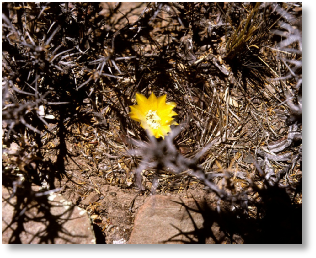 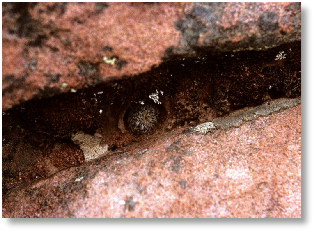 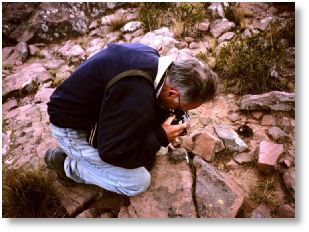 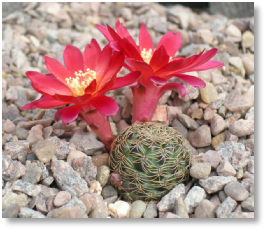 At the end of the week, it was announced that the President had fled the country and the revolution was over. The roads were open. In the remaining week, we drove south to Camargo and Culpina, away from most Sulcorebutia habitats, although there were many more beautiful cacti to be seen including the related genera, Weingatria and Cintia.

We reached Cuchu Ingenio about 1 pm. The town is at a cross roads on the main north-south road and consists of little more than the wide main street with a few cafes, houses and petrol stations. We found one café open offering us a bowl of soup for lunch.