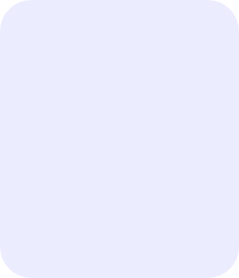 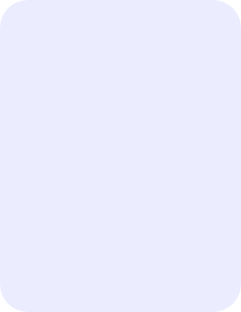 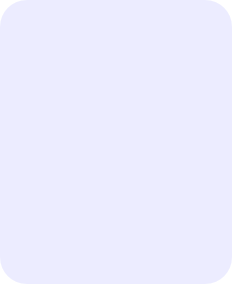 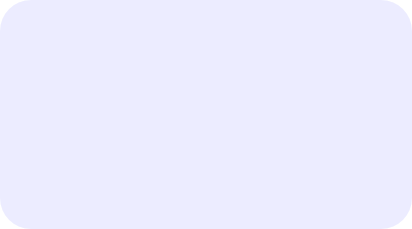 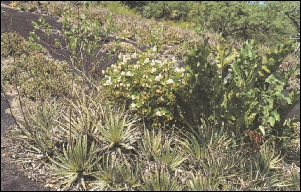 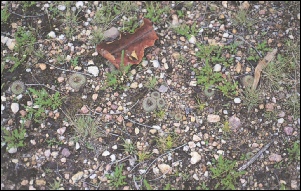 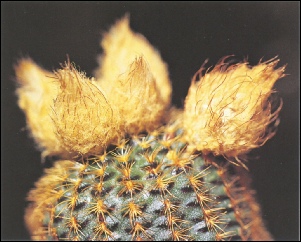 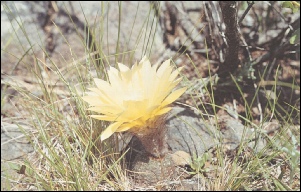 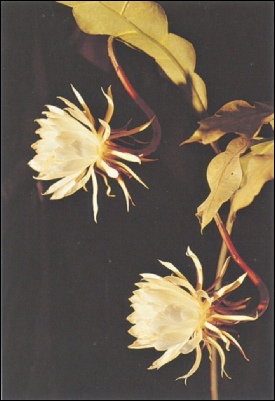 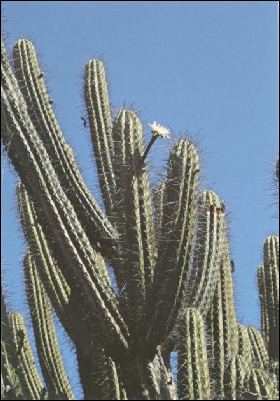 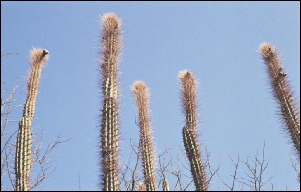 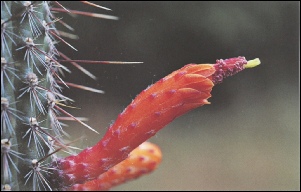 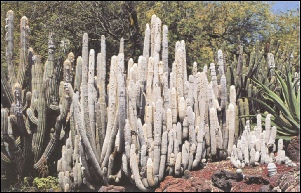 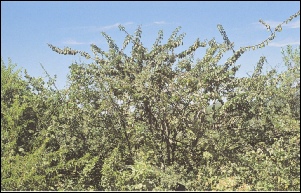 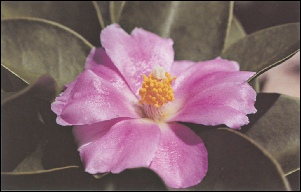 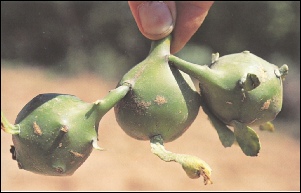 This mass of bromeliads acts as home for these flowering begonias that clearly are healthy even in full sun. Individuals of Echinopsis also grow among

the bromeliads, and several plants of Cereus have taken root where clefts in the rock are wide enough.

These plants of Frailea chiquitana are growing on the edge of a laja, where the soil is only 1 inch (2.5 cm) or less deep. Look closely for the many tiny Frailea seedlings.

Most of the vivid green plants are Selaginella, very primitive plants that reproduce by spores, not with seeds. These selaginellas are similar to some of the earliest land plants

that originated in Pangaea2 about 400 million years ago.

This is usually all you see of your frailea flowers. Flowers of Frailea magnifica look like this while developing and also while they are fruits because they have no intervening open phase.

But the fruits are always full of seeds that germinate well, and a potted plant is usually surrounded by seedlings before long.

Frailea flowers do open sometimes, such as this flower of
F. pygmaea.

Anecdotal reports indicate that opening may be triggered when there is plenty of sunlight on the day the flower is capable of opening. Our experience,

however, suggests that conditions during flower development may be more important:

This aspect of Frailea biology needs to be investigated.

Flowers of Epiphyllum oxypetalum are spectacular,

and although the genus Epiphyllum has only a

few species, they have been used extensively

for crosses to produce beautiful hybrids.

In nursery catalogs, plants of Epiphyllum and

their hybrids are often listed as “orchid cacti.”

where the soil is thick but not rocky, and where humid, wet seasons alternate with those that

are hot and dry. The area resembles southern Texas, where humidity from the Gulf of Mexico

helps create dense vegetation of small trees and shrubs that are difficult to walk through.

The genus Castellanosia was created by the Bolivian botanist M. Cardenas in 1951 for just one species, C. caineana. Unlike the species of Browningia, C. caineana

begins to produce longer spines once it is old enough to flower.

Castellanosia caineana is fairly widespread; this one was photographed in western Paraguay.

forward such that the flower barely opens. The flower tube is also bent twice, near the base and the tip. This seed-grown plant bloomed when less than two years old

and now produces dozens of flowers all summer long every year. If cross-pollinated, it produces red fruits the size of a cherry in only a few weeks.

Plants of Cleistocactus, like these C. strausii, almost always appear healthy and beautiful, whether growing in nature or, as here, in the ideal conditions of Huntington Botanical

Gardens in San Marino, California. The abundant long spines have remained a pristine white although most are many years old. The numerous small white bumps

on the stems are flower buds that are still a few weeks away from opening.

Pereskias are not desert plants by any means and would probably die quickly if planted in even the wettest part of Arizona. This is the habitat of Pereskia sacharosa

(many trees here, except the tallest tree on the left, are pereskias), and although it is moist enough to be this green, it does have a seasonal drought

during which Pereskia survives by dropping its leaves.

Flowers of Pereskia grandifolia are large and resemble roses.

They are good ornamental plants for areas that receive only a few moderate frosts.

Although they do not seem to bloom abundantly, each flower is very nice.

Like most cactus flowers, however, each is open for only one day.

Flowers of most cacti have inferior ovaries, meaning that stem tissue grows around the base of the flower. Consequently, the flower appears to bear leaves with buds.

In pereskias and opuntias, such as the chain-fruit cholla (Opuntia fulgida), the buds can flower, and there are flowers emerging from fruits, which results in young fruits hanging from older fruits.

No plants other than cacti have this growth form.

These are ripe fruits of P. sacharosa.

1 What is a laja is explained by the authors (p. 42) : “Before long, we come across a laja (pronounced la ha), a bald area of exposed, flat rock. The visible rock in a laja is usually not extensive (only several square yards), and on its edge there is a thin film of soil covering the rock. A few feet farther away, the soil is deeper and its waterholding capacity is greater. Because trees can surround a laja but cannot grow too close where the soil is thin, parts of a laja are shady and other parts suffer the full intensity of the midday sun.”

2 Pangaea = a hypothetical supercontinent that included all the landmasses of the earth before the Triassic Period. Pangaea broke apart during the Triassic and Jurassic Periods, separating into Laurasia and Gondwanaland. (thefreedictionnary.com) 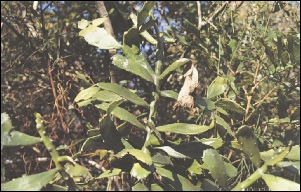 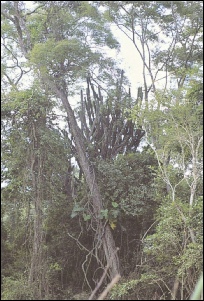 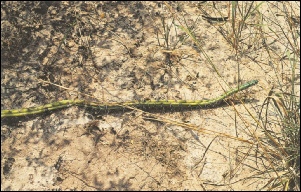 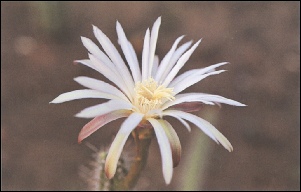 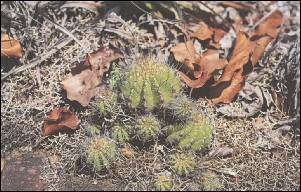 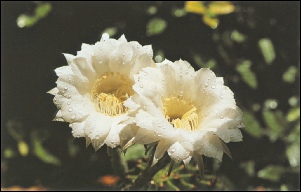 The flattened pads on the sides of Brasiliopuntia brasiliensis reveal that it is an opuntioid species.

Notice the round trunk—even when young it is cylindrical, not flattened.

As it continues to grow, the trunk becomes stout and woody, and the lateral pad-shaped branches elongate by adding new pads that gradually become rounded as wood accumulates inside them.

Cereus stenogonus is growing near the

brasiliopuntia and is also struggling

for sunlight in the shade of the

of a philodendron that is climbing the

tree in the foreground— a good indication that this region receives ample moisture.

This specimen of Monvillea cavendishii snakes along the ground. Only if it accidentally encounters shrubs that will support it does it grow upright. Adventitious roots emerge

wherever the stem touches the ground. Other species of Monvillea are more upright and treelike.

Monvillea cavendishii did not bloom for us in the greenhouse, but when we transplanted it outdoors, it began to flower reliably.

Flowers open at night and do not last long past sunrise, but the burst of white petals and the cluster of stamens are sufficient rewards to getting up early.

This plant is only two years old and is grown from seed we collected in Bolivia.

These plants of Echinopsis hammerschmidii are growing at the edge of a laja.1

The exposed rock is visible in the foreground, but there is soil where there are cacti.

The echinopsises prefer the edge of the laja, where soil is not too deep.

These cacti are temporarily in the sun but will be shaded as shadows of surrounding trees move across them. Behind the echinopsises are terrestrial bromeliads.

Flowers of Echinopsis are always wonderful, making them some of the most popular cacti in cultivation.

Many species and hybrids can be purchased from nurseries, and they bloom every spring, often with many large flowers on each stem. Give them Bolivian lowland conditions:

dappled sun, rich soil, and lots of water in summer.

Cacti in the Forest’s Shade.

As our pickup heads out of Santa Cruz and east toward the Lowlands of Bolivia, we are sure we have made a big mistake: this green, lush forest surrounding us could not possibly be cactus country… 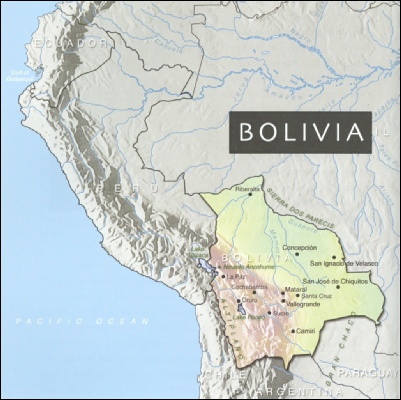 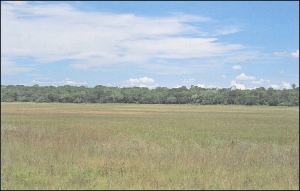 The area near Santa Cruz, Bolivia, does not look like cactus habitat: too flat, too grassy, and too forested. Most of our travels through lowland Bolivia to the southeast of Santa Cruz pass through habitat such as this. Fortunately for us, the area harbors many unusual cacti.

In about May or June, it will be much drier than this.