I had asked Johan de Vries if he could save for me some species still missing in my collection : S. caracarensis, S. juckeri, S. vargasii, S. roberto-vasquezii (the last two are those new plants I had talked about when I visited Johan in 2007, not yet available at that time).

While I was on holiday in Holland for some days, I took the opportunity to go and get my new plants and take a look at the collection of course !

Well, it’s worth making the journey : they are wonderful plants ! Unfortunately it's not possible to buy them yet.

In the meantime here are their photos !

I have seen some lately collected plants still tagged as “spec.”. They still need  further studies to get a name.

Here are some views of this wonderful and well-kept collection !

Middle : S. torotorensis
VZ 415
*See below for other identifications

I tell you once again : if you are interested by Sulcorebutias you must visit Johan de Vries.

You can see there all known species (and even some unknown species) and there is always a large choice of seedlings or cuttings for sale. 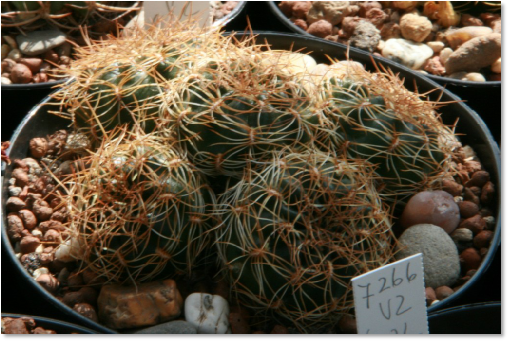